Our lab recently discovered that a ubiquitin-binding shuttle protein, UBQLN2, assembles into protein-containing liquid droplets. This physicochemical process is called liquid-liquid phase separation, and it is hypothesized to underlie how biomolecular condensates (sometimes called membraneless organelles) form inside cells.

UBQLN2 (formerly known as HPLIC2) is a ubiquitin-binding shuttle protein. UBQLN2 is an important component of the protein quality control machinery inside cells that helps to maintain protein homeostasis. It is one member of the ubiquilin (UBQLN) protein family, being one of five UBQLN paralogs in humans. It is well-conserved throughout eukaryotes, with some species only containing one version of ubiquilin (e.g. Dsk2 in yeast). Its canonical function is to interact with ubiquitinated proteins via the UBA domain, and then shuttle these proteins to the proteasome via interactions with the UBL domain.

One mechanism by which this may occur is due to UBQLN2’s propensity to phase separate under physiological conditions, particularly when cells are exposed to external stress such as heat shock or oxidative stress. When this happens, normally diffuse cytoplasmic UBQLN2 reorganizes into spherical puncta that colocalize with stress granules, which are membraneless organelles composed of stalled translation complexes of RNA and protein. Stress granules are hypothesized to be linked to neurodegenerative disorders such as ALS and FTD, as many stress granule components are found in protein-containing inclusions characteristic of neurodegenerative disorders. 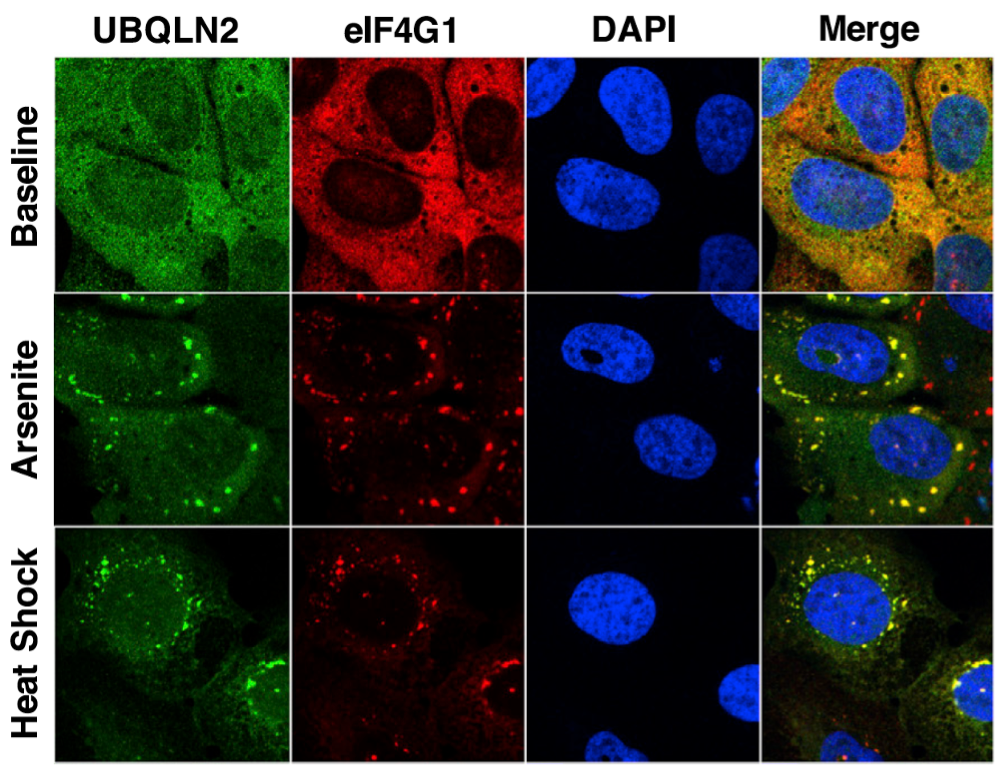 We aim to understand how UBQLNs and other Ub-binding shuttle proteins associate with stress granules and other stress-induced biomolecular condensates in cells. We hypothesize that LLPS is an important feature of UBQLNs that contributes to UBQLNs’ ability to maintain protein quality control. Our evidence suggests that Ub eliminates UBQLN2 LLPS in vitro. This may have important implications for how interactions between ubiquitinated proteins and UBQLNs modulate the spatiotemporal organization of UBQLNs inside cells.

Please read our recent exciting Molecular Cell work that describes many of these findings!